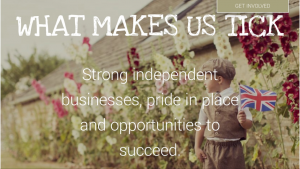 We’ve been out and about recently talking to Family Businesses of all size and age – the common theme is that they are really focused and tend to quietly get on with doing really good stuff.  If asked ‘do you celebrate being a Family Business’?  The answer is usually NO – that’s not what we do, it wouldn’t seem appropriate to ‘flag wave’’.  Well let me tell you family businesses are essential to Local, Regional and National economies…. let’s have a look at some of those UK Family Business Facts and Stats……. courtesy of the IFB and Oxford Economics. 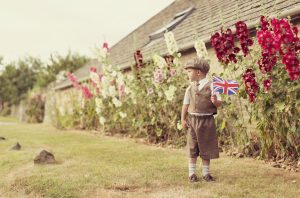 Family businesses are individually BRILLIANT and collectively AWESOME, so if you ever thought you had no flag to wave think again!  Whether your 1, 10, 40 or 150 years old, they are all key milestone’s and you will have positively impacted many people along the way, your customers, your suppliers, your fabulous teams – so why not celebrate.   Take a look at Family Business conferences and Awards in your region – attend the Cumbrian Family Business Conference open to all Family Businesses not just Cumbria!  Enter regional and national awards such as the Cumbria Family Business Awards.  Go on it’s time to wave the Family Business Flag!   If you’re planning a celebration, we’d love to come! 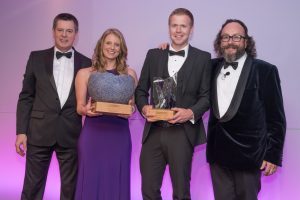 Time to wave that FLAG…

Only in Cumbria can you get a group of businesses together who walk through a ‘light shower’ to get on a boat, dressed in frocks and suits!  But hey, we live in and around a newly formed World Heritage site and boy how lucky are we to live and work on the edge in one of the worlds most beautiful areas.

This was our first IoD event, jointly organised with the Cumbria Family Business Network and we were truly impressed with the light touch organisation that just allowed us to talk to each other at the wonderful, Family run Waterhead Hotel in Ambleside, part of a brilliant Family operated hotel group.

The noise level in the Cumbria Tourisms hotel of the year 2016 gradually rose as old and new acquaintances and friends caught up with each other.   Then boarding the Windermere Cruises boat just confirmed why we have finally been confirmed World Heritage Status, there cannot be many places with better scenery than that which surrounds Lake Windermere.

This sentiment was echoed by our keynote speaker, Kevin Roberts, who with a choice of houses across the world haschosen Grasmere as his UK base and is also his choice for his wedding!  Kevin, I have to say, is a great speaker, he highlighted Cumbria as the ideal location for innovation as it is far enough from London to allow free thinking and creativity (a sentiment we completely agree with). Likening us to his other favourite haunt in New Zealand with both areas destined to change the world from the edge – think of New Zealand’s world beating All Blacks or Cumbria’s world beating Food, both from a geographical edge and both world beaters. 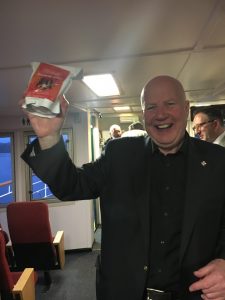 Quick apology to Kevin for thinking his rattle snake was a sheep…we don’t get many snakes in Cumbria – long story!

So what were our takeaways from Kevin?

Cumbrian businesses should create and innovate as we are on the edge – geographically speaking!  With edge creativity we can ‘win the world’ – our region must be innovative and creative because of our brilliant geography. He commented we are over managed in the UK which is blocking creativity and Cumbria has the opportunity to inspire NOT command and control.  He said, leaders don’t get things done, they make things happen – agreed!  Leaders create other leaders – so true for generational family business – he said we must create leaders across generations – agreed! 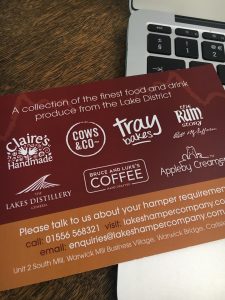 Only in Cumbria would this world renowned speaker be presented with a locally produced food hamper as a wedding gift…truly a sign that Cumbrian businesses collectively recognise the uniqueness and quality of the food we produce.  With that in mind the cruise was really helped by the provision of an awesome Cumbrian buffet who proudly offered their very own roast ham and Cumberland sausage.

After dinner had lots of useful conversations, including one with Spencer and Diane from Herdy its only when you start talking about what you want to do that you really start knowing what you are offering to the world.

The whole night made us think that business has always been about “Getting your message out.” which is an acquired art, BUT jumping back into business is just like riding a bike…you think you remember it all and then you hit a bump, fall off graze your knee and get back on again…the secret is just to keep in getting back on the bike more times than you fall off it.  As Kevin said entrepreneurs and leaders build fast, fail fast and learn fast. 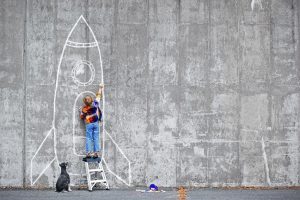 Our journey starts some time ago when we joined Jacqui’s family business (4th generation), there for twenty years we saw exponential growth in sales, profits and people – we were most proud of the fact that we were acknowledged as one of the best retail outlets in the country…it was recognition not profit that drove us.

We sold the business (a family decision rather than a business one) and have spent ten years honing our skills in supporting family business – everything from Retail Vice Chair of the £3.2bn National Guild of SPAR, Head of Family Business Engagement at Lancaster Uni, Vice Chair of Carlisle Food City, Advisory Board Member for Revive and Thrive, Chair of the Industry Advisory board for the FSA, Judge for the Guild of Fine Food Awards and experts in Family Business and Food Supply Chain.

Then a few years ago our son started his business journey as a coffee shop owner and coffee roaster. Supporting him on his journey we realised there was no “go to” group that could support the unique situation that is created when family and food business is combined. We aim to change this. In 2016, working with Carlisle Food City we created a food map based on Google Maps…basic but it got the message out that there were many food business in the area. This interest gained support from the University of Cumbria and working with Ivention and Carlisle City Council we launched the Local Food Show in 2017.

We have now, with a great deal of help from Sparrow Digital, upgraded our map and are launching a website that we hope will act as a catalyst to focus support for Family food business. We are working on literally ‘putting OUR money where OUR mouth is’ and are acquiring a BUILDING to house a Local Food Producer, those wonderful desk based businesses who can add so much value to the food sector,  as well as a Centre for Family Food Business – a HUB in the making!  As Thomas Jardine & Co we will offer practical support to Family food businesses from Mentoring to Peer Groups to 360 degree views of their business and bespoke consultancy.

Family food businesses have a significant impact on the place in which they are based, from pure economic impact to creating a unique taste of that place. Family businesses account for a quarter of UK GDP and 20% of UK Government Revenue.  We reckon on the latest figures there were 3,975 [1] people employed in Cumbria’s small and medium family food and drink manufacturing businesses, or 2.3% of the total work force and this doesn’t include those employed in larger food businesses (640 [2] employees at United Biscuits in Carlisle which is of course a family owned business).

We don’t really want to bore you with too many facts and stats, but suffice to say YOU (Family food businesses) are BIG and CLEVER.  If you want to join us on our journey contact us at hello@thomasjardineandco.co.uk and checkout our new website, let us know what you think.  Let’s start some noise @thomasjardineco #familyfoodbiz.