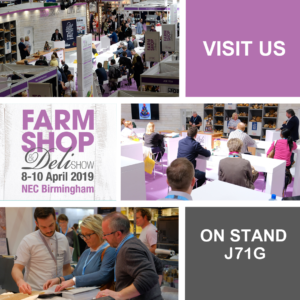 This is Cumbria : the beginnings

Between the 8th and 10th of April a large group of Cumbrian Food and Drink Businesses are going down to the Farm Shop & Deli Show at the NEC. They are going down as individual businesses but are locating in one large ‘This is Cumbria’ pavilion.

This is Cumbria started as an idea at last years show from two businesses Ginger Bakers and Hawkshead Relish. They both wanted to make more noise about the great businesses based in Cumbria.  So as you do, they booked a huge block right next door to the main stage for next year.

A few days later Maria from Hawkshead Relish rang us (Thomas Jardine & Co) and Sue from the Family Business Network to see if we could help fill, name, promote and develop the space. The answer was of course yes. The name ‘This is Cumbria’ came up as the collective name for the stand and We are Eclectic stepped up to do the design work for the show. As we write, Printing Plus have stepped up to do our printing.

This is Cumbria at the Farmshop & Deli Show

The plan is to make ‘This is Cumbria’ a regular of the Farm Shop and Deli Show.  To achieve this we created a showcase area to allow businesses to test the water in a friendly environment.  They will be surrounded by businesses who are more experienced with these types of shows. Two key sponsors Cartmell Shepherd and Enterprise Answers both stepped forward and financially supported areas for these businesses (Cartmell Shepherd the showcase area and Enterprise Answers the enterprise zone).

This is Cumbria:  our supporters

The activity around the show is now growing.  Maria has given a brilliant masterclass at the NWBH show on getting the most of a trade show. We are also holding a drinks reception on the 9th with Nigel Barden and various Cumbrian Chefs will give ‘This is Cumbria’ a shout from the main stage.

Help is coming form all sorts of other places, 32West have helped with press releases, Freya from WRBM has answered all our queries, BBC Radio Cumbria have talked to us about the progress of the show and loads of tweeters are helping spread the word. This is Cumbria is happening because businesses want it to happen. It’s going to be interesting to see where we go next…

The ‘This is Cumbria’ collective has this week launched a new brandmark that will represent the forward-thinking group of businesses at a national event next April. The brand has been launched as the collective make a final call for Cumbrian producers and craftspeople to join them at their inaugural event, the Farm Shop & Deli Show at the NEC 8-10 April 2019.

The initiative was formed earlier this year with an aim to create a ‘big impact’ destination stand that could position the very best of Cumbrian food, drink and produce in front of thousands of key buyers. With much of the space already booked, just four trade stands are remaining. Come and join the likes of Hawkshead Relish , Ginger Bakers, Kin Vodka, Tray Bakes, Kendal Mint Liquor and Shed1 Distillery.

‘This is Cumbria’ are also offering a number of affordable ‘Show Case’ stands to developing businesses that are new to national trade shows. Keith Jackson one of the co-organisers from Carlisle-based Thomas Jardine & Co, said “Cumbria is full to the brim with creative people who all share a common bond – they are all inspired by Cumbria to create exceptional things, which comes through in our newly unveiled brand identity.

“We wanted to offer those businesses who are first-time trade show exhibitors an introductory opportunity which requires a lower investment of cash and time than a regular stand would, with the added benefit of extra support through event training and participation in promotional collateral. We’d encourage any businesses that may be interested to get in touch for a chat about what we can offer.”

For businesses taking full trade stands at the event, ‘This is Cumbria’ are also offering a number of unique benefits which include pre-show PR and social media build up, inclusion within a dedicated booklet and a drinks reception hosted by celebrity chef, Nigel Barden.

Sue Howorth of The Family Business network said “We’re delighted to support this exciting initiative that offers growing businesses a platform and a voice outside of Cumbria. I can’t think of a better opportunity for those looking to reach a national audience or to raise their brand awareness.”

The Farm Shop & Deli Show takes place at the NEC from 8-10th April 2019. For more information or if you are interested in joining the growing collective that is ‘This is Cumbria’, contact Keith Jackson on hello@thomasjardineandco.co.uk or visit the facebook page @ThisisCumbria